The books of the 15th Century were, apart from limp bound (bound with no boards like an early paperback) and girdle books (made to hang from the belt), bound with wooden boards with the pages sewn around a number of cords with the whole covered in soft leather, usually goat skin. This 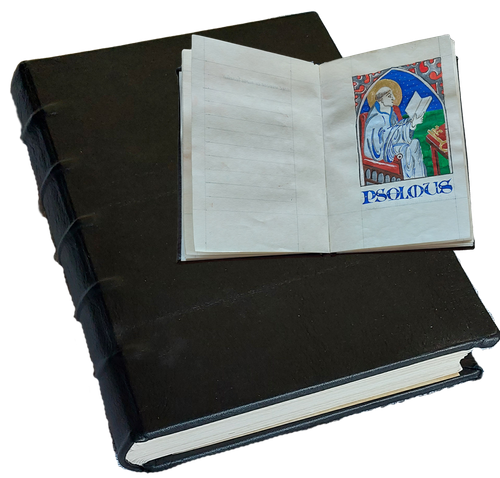 gave the book the character which we associate with medieval books, the leather being raised where the cords are beneath it as in the illustration.

In films the books of the period are usually depicted as being huge volumes but, as today, book sizes varied. Printing with moveable type had appeared in Britain at this time, brought from Johanus Guttenberg in Germany by William Caxton, and this meant that books could actually become smaller.

From larger psalters and bibles to neat and highly decorated books of hours (books of the prayers required throughout the day) were becoming cheaper and, as a consquence, plentiful. There was still a need for the hand written manuscript book and these continued to be produced well into the next century.